Terezín, also know as Theresienstadt in German, is a fortress or walled city located in near the city of Litoměřice just north of Prague, Czech Republic. The fortress and surrounding areas have had several significant and crucial roles in the history of Czech Republic since it’s creation and construction in the 1780s.

It was originally a fortress built by the Habsburg Emperor Joseph II and served as such for over 100 years until it was commissioned as a prison and later in World War I, a prisoner of war camp. In fact, the prison once held, Gavrilo Princip, the assassin of Franz Ferdinand, Archduke of Austria and his wife, which ignited the start of WWI.

It’s most notorious and sad role came during World War II when it was converted into a concentration camp, receiving tens of thousands of Czechs, Czech Jews, as well as several other nationalities, ethnicities and resistors of the Nazi regime.

Since then it has served other purposes and today it is a memorial to all of those who lost their lives and suffered within these walls. While it is mostly definitely a somber visit, it is one of critical importance in order to remember the past with the hope that it will never be repeated. 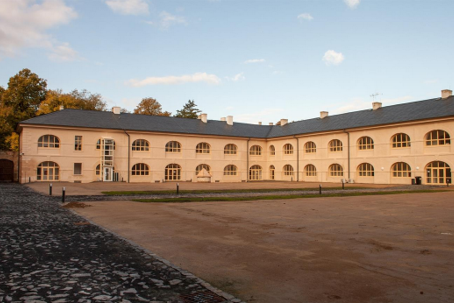 This is the now world-famous and infamous slogan that was originally painted above the entrance to the Small Fortress within Terezín when it was first commissioned as a concentration camp by the Nazis during World War II. The camp was originally meant to a combination of a concentration camp and ghetto and not strictly as a death camp as some of the more notable ones in Germany. It was to serve as a waystation as people were arrested and detained by the Nazis within the Czech Republic and later sent on to the extermination camps. The propaganda campaigns even promoted it to the general public as a retirement home for prominent Czech Jews as a way to hide the truth of the Nazi’s intention to eliminate all Jewish people.

However, from 1940-1945, over 100,000 people passed through the walls of Theresienstadt. Over 33,000 of those people never left the walls alive. Some 88,000 were sent on to other concentration and extermination camps. Of all those who spent some time in Terezín, only about 23,000 survived the war. 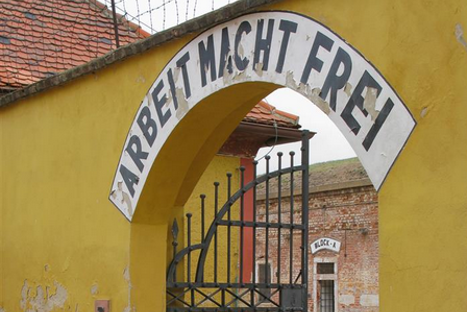 While it cannot be disputed that the past of Terezín has hardly been a happy or pleasant one, today Czech historical and cultural societies and Jewish communities, along with the Czech government are working to maintain the fortress and its memories in order to better educate and inform the public, both foreign visitors and local citizens alike, about the horrors that occurred within the walls. Visits to Terezín are quite popular today as it offers a clear and honest presentation of the activity surrounding this somber site.

The fortress itself and the walls and moats immediately surrounding it create a beautiful scene, and from above one can make out the 12-pointed star etched into the earth. 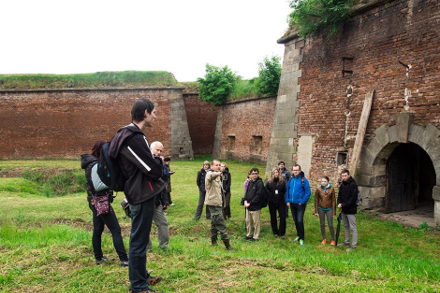 How to get to Terezín

Terezín is one of the more easier to reach locations near Prague as there are several options to arrive there. In addition, for those looking to take a day trip from Prague, this is one of the closest options. The fortress can be found about 60 kilometers (36 miles) north of Prague in northern Bohemia.

It is an easy drive which can be done in about 45 minutes if traveling by private or rented car. This is done following Highway D8 due-north from Prague.

There are also tours which take visitors and history and WWII buffs there on a daily basis.

And there are buses and trains leaving at least once an hour from Prague’s Nádraží Holešovice (Holešovice Train Station) which is not far from the downtown of Prague which offer direct buses to Terezín. In addition, there are indirect and transfers offered by bus or train to Litoměřice, a quiet beautiful town just across the river from Terezín. From there you can easily take a quick bus from the bus or train station to Terezín.  Or you can take a train to Bohušovice nad Ohří and make the transfer.

Lunch Included!
From €50+
Travel with Kids to Prague
Children's SpecialEducationalFamily HolidaysLegends-Ghosts
We have years of experience working with young kids and families of all sizes. We have developed and created amazing day and multi-day tours and trips in Prague and the surrounding areas that will delight and excite your children as well as the adults involved. There are boat trips, fairy tale themed guided tours, guided zoo tours, graffiti workshops, ropes courses, museum visits, parks and playground visits with games, chocolate making classes, and more!
View Details
6 Hours
More than 1
2+

Most Popular
From €75+
Karlovy Vary | Royal Spa Town
HistoricalRomanceTraditional
Experience a small group day tour of Karlovy Vary, one of the most popular day trips from Prague. The town is is a complete and utter delight in every way possible. Here the earth gushes with bubbling hot spring water, said to have healing values. Learn about the royal decree that made this area the royal retreat to the Holy Roman Emperor Charles IV and gained international acclaim over the years. See a glass factory to watch artisans at work and later try the local, internationally-known liquor.
View Details
5 out of 5
1 Reviews
1 Day
More than 1
2+