Kutná Hora is currently a relatively small, slow-paced town, hardly a city, located to the east of Prague in eastern Bohemia. It’s close proximity to the capital of the Czech Republic has made it one of the most popular day trip destinations for those looking to get out of Prague for a day.

You wouldn’t know it by looking at it today, but it once provided the known world with the majority of the silver. During this time period, the city was bustling, lively and rich beyond belief, and it was also more powerful and important that Prague itself. The power and population size rose and fell during the various wars and diseases that plagued central Europe over the centuries and when silver was discovered in the New World, Kutná Hora lost some of its strength.

Despite that, it still offers visitors some of the most beautiful and awe-inspiring sights in the Czech Republic. The Sedlec Ossuary Bone Church, Italian Court, and Saint Barbara’s Cathedral just to name a few. And to top it off, it is unspoiled with all of the tourism and still maintains its small town charm and demeanor. 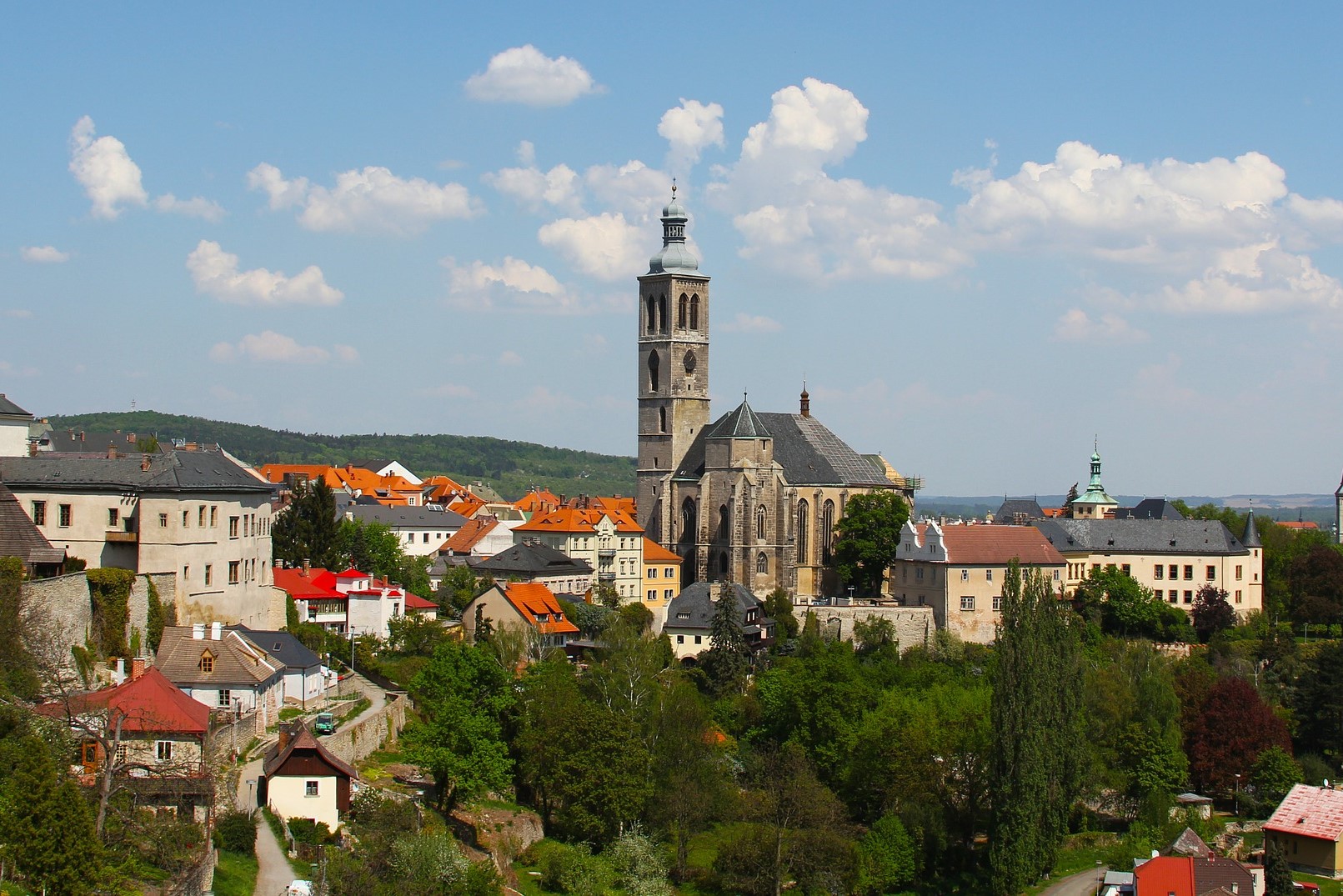 The Saint Barbara Cathedral, which is the most prominent building in all of Kutná Hora, stands upon a hill at the far side of the city. It is a massive structure, yet the original drawings called for it to be nearly twice the size it is today. In addition, due to the lack of funding over several centuries, it took 500 years for the church to be completed, starting in 1388 and continuing till 1905. During that time, not only did the size nearly get cut in half, but due to changes in styles and architectural preferences over those 5 centuries, the original Gothic design was later modified slightly to take on a more Baroque style. The construction is a beautiful marriage of the two time periods.

St. Barbara is the patron saint of miners (as well as military men and anyone who works with explosives) and so the faithful silver miners of the 14th century wanted to pay homage to their patron saint and raised the funds to do so. The artwork inside the church still depicts the devotion for the saint as well as the saint’s love of her patrons, through the murals seen within. 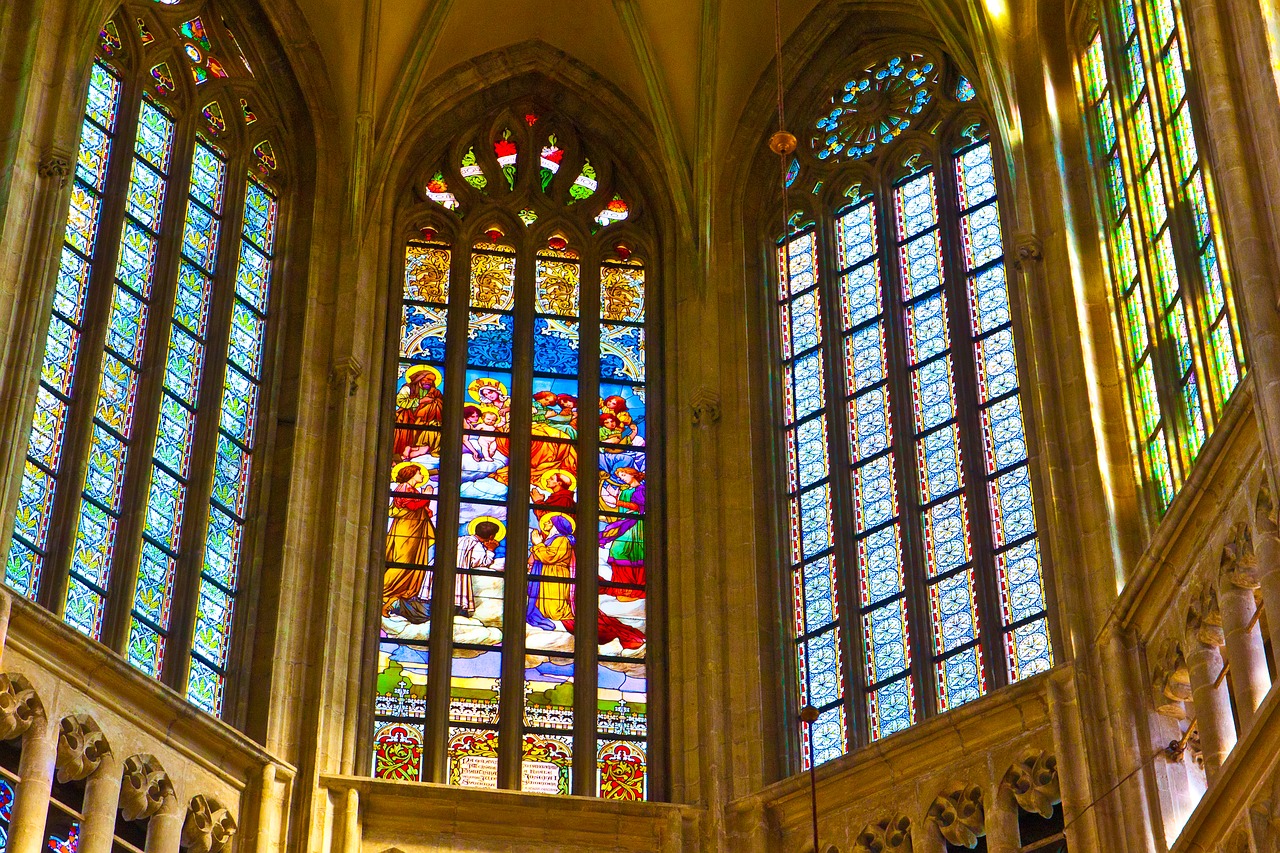 Just to the north of Kutná Hora on the outskirts of town, there stands a not so small chapel which has been made world famous due to the interior decoration of the chapel. Instead of crystals, paintings, murals, statues and tapestries, you will find the bones of over 50,000 lost souls. The story behind how they all arrived to this location is indeed quite sad and tragic.

However, the story behind how they came to be as they are now is not! Without giving away too many details, one could say that what was once a mournful memory is now an amazing presentation and incredible structural achievement. The Sedlec Ossuary or Bone Church as it is commonly referred to, is one of the most visited spots in the Czech Republic. You will have to judge for yourself whether or not entering a church full of the bones of 50,000 skeletons is creepy and scary or amazingly beautiful. 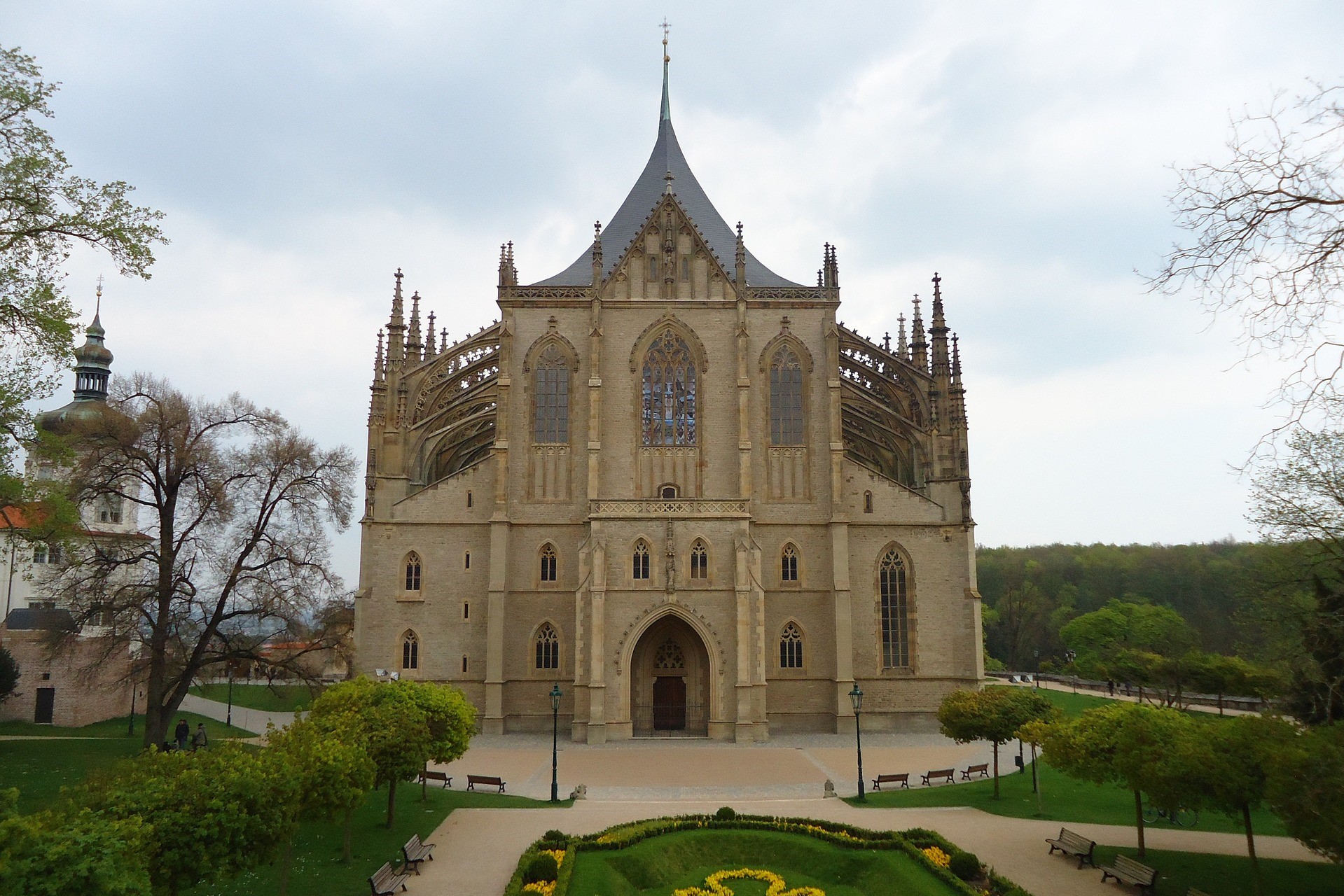 How to get to Kutná Hora

Kutná Hora is located just to the east of Prague, less than an hour’s drive, making it one of the most visited, most popular and most convenient to get to for those interested in a day trip from Prague.

The most common and popular way to reach is by a private car transfer as the trip door to door from the center of Prague to Kutná Hora is only about an hour’s drive.

For those who do not wish to drive, they can take a train from Prague’s Main Train Station, (or several of the other smaller train stations). The trains leave every hour or two depending on the time of day and take about 1 hour.

If you are interested in visiting the Sedlec Ossuary Bone Church, you can exit the train at the Kutná Hora Main Station and walk several minutes to arrive at the chapel.

If you wish to go directly to the center of Kutná Hora, then you must switch trains at the Kutná Hora Main Station and take another train to Kutná Hora Mesto (town) which is much closer to all of the other attractions. This would add another 20 or 30 minutes onto the commute time.

Lunch Included!
From €100+
Český Krumlov: Charming, Enchanting & Captivating
HistoricalRomanceTraditional
See the magic of South Bohemia, from royal castles and towers to small cobblestone streets and charming shops and restaurants. This Český Krumlov day tour will leave you spellbound and captivated. Český Krumlov is the most popular day trip from Prague and when you go you’ll know why. It’s as if you have stepped into the pages of a fairy tale and at any moment you could come upon a poor maiden, ready to be saved by a noble prince who will whisk her away to the castle on the cliff, overlooking the red-roof lined town. The Vltava River (the same which eventually flows north to Prague), flows through the city at a melodic pace and over several small weirs and has carved the town into a peculiar shape which almost resembles a puzzle piece.
View Details
5 out of 5
1 Reviews
1 Day
More than 1
2+

Lunch on a Boat
From €65+
Castle to Castle Tour in Prague
CulinaryHistoricalLegends-GhostsTraditional
Take Prague's best private tour to TWO castles! Everyone comes to Prague to see the majestic Prague Castle, but they do not know that just down river from this royal seat, there is another castle Vyšehrad, which was established at nearly the same time as the former and was also once the chosen seat for Prague's ruling class. Both castles hold their own dramatic and sometimes tragic histories. Both claim their own folklore and legends and both stand high above the rest of Prague, allowing for some of the best views of the city that you'll have while visiting us.
View Details
5 out of 5
1 Reviews
6 Hours
More than 1
2+